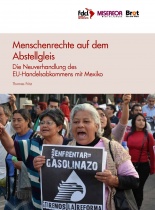 On the occasion of their bilateral summit held in June 2015, the European Union (EU) and Mexico agreed to renegotiate the Global Agreement in force since 2000. The main pillar of this bilateral treaty is a free trade agreement (FTA) due to be ‘modernized’ by way of the renegotiation. A new study published by Brot für die Welt, Misereor and FDCL addresses the potential social, environmental and human rights impacts that ‘modernization’ of the EU-Mexico FTA could cause. It also assesses the outcomes that the Global Agreement has produced so far.

From a Mexican perspective, the overly optimistic expectations placed on the Global Agreement have not been met. Rather than diversifying its export markets, Mexico continues to remain heavily dependent on the U.S. market: 80 percent of its exports still go to the United States. Moreover, the trade deficit with the EU is widening: between 2002 and 2015 it grew from €8.6 billion to €14 billion.

During the last decades, Mexican governments adopted a raft of measures turning the country into a low-cost manufacturing hub for transnational corporations, which set up assembly plants in the automotive, electronics and textile industries. But the low-cost strategy has come at a price. Compared internationally, Mexican wages have fallen sharply. They are not only the lowest among OECD countries but are also low compared to various other emerging economies. For instance, hourly wages in Mexico are now 42 percent lower than in China.

Despite a dramatic deterioration of Mexico’s human rights situation over the last decade, the EU refuses to apply the Global Agreement’s human rights clause enabling government consultations and trade sanctions in case of serious violations of international norms. Since 2006, when the Mexican government launched its war on drugs, more than 150,000 people have been killed and 30,000 have become victims of forced disappearances.

In June 2015, the EU and Mexico started their bilateral talks to ‘modernize’ the Global Agreement. The European Commission’s negotiating directives set out a very broad agenda including issues such as investment, services, government procurement, intellectual property rights, energy and raw materials.

The EU wants to prop up the transnational seed and pesticide business by facilitating the use of chemicals and high-yielding varieties in agriculture, including hybrids and GMOs. This would benefit biotech companies such as Germany’s Bayer, which is currently negotiating the take-over of global seed giant Monsanto. In Mexico, Bayer’s local subsidiary presently sells two insecticides suspected of causing cancer and endangering bees: Semevin 350 and Poncho Super. The two are prohibited in the EU. Bayer’s Finale Ultra herbicide, also sold in Mexico, may lead to malformations of fetuses.

Smallholder farmers risk losing access to seeds should the European Commission’s objectives eventually prevail. During the negotiations, the EU tabled a request asking Mexico to ratify the 1991 act of the International Convention for the Protection of New Varieties of Plants (UPOV). By severely inhibiting the free exchange of seeds, the UPOV 1991 convention threatens the biological diversity of Mexican agriculture. This would affect three million smallholder farmers whose locally-adapted traditional crops underpin Mexico’s food security.

One of the most sensitive issues of the EU-Mexico negotiations relates to the EU’s objective to include investment protection and the highly contested investor-to-state dispute settlement procedures in the new trade accord. The Global Agreement currently in force does not have such provisions. The EU advocates specific rules granting transnational corporations the exclusive right to seek compensation before international tribunals in the event of regulatory changes deemed to violate investors’ ‘legitimate expectation’ of a stable business environment.

Gold rush for the energy sector

Since 2014, when Mexico opened up the oil and electricity industry to foreign investors, transnational corporations have embarked on a new gold rush. For the first time in almost 80 years, private companies may directly invest in the exploration and production of oil and gas. The contracts to be awarded in successive bidding rounds cover on- and offshore fields, including several deepwater oil reservoirs and the country’s significant shale gas deposits.

Shale gas extraction, however, met with widespread resistance by local communities fearing the contamination of groundwater due to the highly polluting fracking technique used for drilling. Afraid that these conflicts might deter potential investors, the Mexican government reacted by creating a new 5,000-strong police force (‘gendarmería’). Luis Videgaray, Mexico’s minister of foreign affairs, explained its rationale: ‘One of the basic objectives for the gendarmería, created as part of the federal police, is to be deployed in areas of economic activity, including the energy industry, whenever necessary.’ However, human rights defenders fear that this troop may also be used to suppress local protests against oil and gas extraction.

The ‘modernized’ trade agreement aims at facilitating European investment in the Mexican energy sector. It will almost irreversibly ‘lock in’ the market access liberalization afforded under the 2014 Mexican energy reform. In addition, the EU seeks provisions impeding price controls on electricity and fuels, effectively restricting the policy space to pursue pro-poor energy regulations.

Recent protests over fuel price hikes (the ‘gasolinazo’) demonstrate the energy reform’s considerable potential for conflict. Despite these risks, the new trade agreement is due to place very tight constraints on any future government seeking to initiate a socially or ecologically motivated change of course in Mexican energy policy.

Given the numerous labour rights violations committed by European companies in Mexico, it would be essential to include an enforceable and sanctionable social clause in the ‘modernized’ trade agreement, as some EU Member States have already urged. However, the European Commission consistently rejects the inclusion of sanctionable social clauses in EU trade agreements. To make matters worse, it is not even prepared to launch official consultations with the Mexican government to improve the country’s human rights situation.

A conclusion of the new EU-Mexico trade agreement appears unacceptable, given its manifold risks.

Executive summary of a study originally published in German: