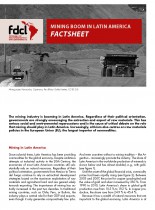 The mining industry is booming in Latin America. Regardless of their political orientation, governments are strongly encouraging the extraction and export of raw materials. This has serious social and environmental repercussions and is the cause of critical debate on the role that mining should play in Latin America. Increasingly, criticism also centres on raw materials policies in the European Union (EU), the largest importer of commodities.

Since colonial times, Latin America has been providing commodities for the global economy. Despite ambitious attempts at industrial activity in the 20th Century, the economies of most Latin American countries still substantially rely on natural resources. Regardless of their political orientation, governments from Mexico to Tierra del Fuego continue to rely on extractivist development
strategies based on the maximum exploitation of raw materials and agricultural land and are geared solely towards exporting. The importance of mining has actually increased in the past two decades. In traditional mining countries, such as Chile, Peru, or Bolivia, the industry plays a central role for their GDP and exports, even though it only generates comparatively few jobs. And even countries without a mining tradition – like Argentina – increasingly promote the industry. The share of Latin America in the worldwide production of minerals is shown below and has almost doubled, e. g., with gold.

Zur Kampagne „Hands on the Land for Food Sovereignty“ 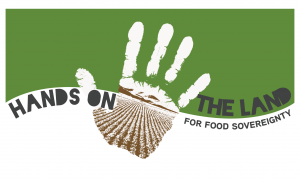