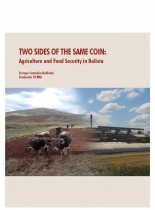 During the last decades, Bolivia has experienced significant economic and social progress. An important economic growth coupled with social inclusion of historically marginalised groups have translated into better days for Bolivian society. As expected, however, many challenges remain. One of the pending tasks is to enhance the population’s nutritional levels as well as to reduce food insecurity in some rural areas. In addressing this task, many structural factors should be considered such as poverty prevalence, lack of appropriate infrastructure, sanitation, and the country’s agricultural structure. This document deliberatively focuses on the latter factor as it seeks to highlight the importance of domestic agriculture for Bolivia’s food security.

The 2008 international food crisis has revived the debate regarding the efficiency of the current agri-food system to satisfy a growing demand for food. At the crux of this discussion lies the need to rethink the way agriculture is performed. Although in a simplistic fashion, there is arguably a fundamental conflict between two different agricultural models. On the one hand, the agroindustry linked to powerful business groups that advocates for large-scale monocrop production with high levels of external inputs; and, on the other hand, the peasant family agriculture based on family’s labour, agroecological principles and low levels of external inputs. Recent evidence shows that the former model is gaining ground rapidly as a result of significant political and economic support from nation states and transnational corporations.

In Bolivia the trend is very similar. The peasant agriculture that has historically provided food for the population is currently stagnant whereas the agroindustry, through soybean production, is moving forward very quickly. Albeit both agricultural models form the “dual character” of the country’s agricultural structure, the sharp contrast in their present circumstances allow us to pose the title’s analogy. Needless to say, that this dichotomy is essentially reductionist, but nonetheless useful for analytical purposes. That noted, the aim of this paper is to weave a general picture of the state of agriculture in Bolivia and its relation to food security concerns. Based on secondary data and semi-structured interviews with key informants1, the paper pretends to put forward relevant information and arguments to enrich food security discussions in the country.

This document is comprised of six sections, including this introduction. The second section briefly presents the food insecurity context in Bolivia focusing in particular on the most vulnerable municipalities. The third section reviews official data to depict trends of agricultural production and its implications on the country’s food security. Subsequently, in the fourth section, an analysis of the current situation of the peasant agriculture is conducted in order to show its characteristics, the causes of its stagnation and the livelihood transitions that are emerging as a result. The fifth section pays attention to the expansion of the agroindustry that today is closely related to the growth of soybean production in the eastern part of the country. The final section offers the principal conclusions of the study as well as some relevant recommendations for decision makers.

Editors:
Forschungs- und Dokumentationszentrum
Chile-Lateinamerika – FDCL e.V.
Gneisenaustraße 2a, D-10961 Berlin
Fon: +49 30 693 40 29
Fax: +49 30 692 65 90
eMail: info@fdcl.org
Internet: http://www.fdcl.org
Author: Enrique Castañón Ballivián
Layout: Monika Brinkmöller
Print: Copyhouse
Cover photo: Fundación TIERRA
© FDCL, Berlin, February 2014
Two Sides of the Same Coin:
Agriculture and Food Security in Bolivia
Enrique Castañón Ballivián| FDCL| February 2014
Enrique Castañón Ballivián
A Bolivian agronomical engineer with a master in Environment and Development at King’s College
London. The author gratefully acknowledges support from Fundación TIERRA, the Centre for Research
and Documentation Chile-Latin America (FDCL) and Alexis Williams in the elaboration of this
paper. He can be contacted at: e.castanon@ftierra.org or enriquedcb@hotmail.com.
Produced with financial support from the European Commission.
The views expressed herein are those of the author and not of the EC.