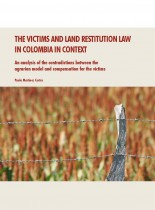 Law 1448 passed in 2011, better known as the Victims and Land Restitution Law, has been promoted officially as a demonstration of ‘good will’ by the Juan Manuel Santos government in Colombia. The law represents a cog in the transitional policy aimed at facilitating steps towards a post-conflict scenario. However, the law’s main objective is to provide recognition to the victims of the Colombian armed conflict. This stands in contrast to the policy of denial enacted by the previous government. In order to provide recognition to the victims, the law aims to secure victims’ rights to access truth, justice and appropriate compensation while guaranteeing these people will never be victim­ized again. As such, this law is not merely about officially recognizing the conflict and its victims, it also aims to provide victims of the conflict with compensation.

These demonstrations of political will are rep­resentative of the unusual debate surrounding the conflict; a debate that has been confounded by a number of factors that make implement­ing the law particularly difficult. Furthermore, the law is formulated in a manner that reflects the diversity of the field it seeks to regulate, and this is clear throughout its 80 pages.1 However, this should not imply that the law is being suc­cessfully implemented on the ground. This is a particularly important factor, as the law was only designed to regulate the current transition­al period. Moreover, the armed conflict in Co­lombia continues, and is fundamentally linked to conflict in the political and socioeconomic spheres.

Since Law 1448 was enacted in 2011, vari­ous reports have been published that evaluate the law’s potential and the challenges faced by its implementation. These reports range from an official analysis that presents data with­out providing significant references to their context;2 to publications in national media such as the Victims Report in the magazine Semana that illustrate the data by focusing on “victimiz­ing events but not the background or meaning behind victimization”.3 Reports have also been published by NGOs and organizations in an at­tempt to defend human rights by pressing the Colombian state to fulfill its obligations. At the same time, the Victims and Land Restitution Law has been the object of intense debate among different national and international sectors.

This study seeks to contextualize Law 1448 and frame the discussion in relation to the spa­tial scenario in which the law is being applied: Colombian rural areas. The aim is then to high­light urgent issues that could act as indicators of rhetorical intention in favor of the (mainly rural) victims. These intentions are not consistent with the development policies imposed by the na­tional government and actually hinder the pro­vision of comprehensive reparations to the very people the law is supposed to defend.

Furthermore, this study aims to relate the land restitution process, and the possibilities of achieving its goals, to the recent national scandals associated with the extractivist, ex­clusionary and developmentalist model imple­mented by Juan Manuel Santos’ government. These policies include: i) land grabbing in the Colombian Altillanura, and other regions such as the Montes de María mountain range; ii) ef­forts by the government to dismantle the few legal instruments that defend indigenous, Afro-Colombian and peasant farmers’ territories; iii) and the repressive treatment of dissent and protests against the imposition of the govern­ment’s model. One example is the recent na­tional agrarian strike. The government’s reac­tion to the strike was characterized by a lack of understanding of the conflict’s complexity: the conflict is more than just an armed conflict; it is also aggravated by diverse policy measures and official decisions.

Introduction
1. The context of the socioeconomic, political and internal armed conflict in Colombia
2. Serious human rights violations and denial of the conflict by the previous government (2002—2010)
3. Juan Manuel Santos’ government: ‘cleansing’ Colombia’s image in order to continue the extractivist, neoliberal model of development
4. Demonstrations of ‘good will’: the Victims Law and peace negotiations as inconsistent rhetoric
5. The debates about Law 1448 (2011), better known as the Victims and Land Restitution Law
5.1 A post-conflict law in the midst of an unfinished conflict
5.2 A transitional law that oscillates between the longing for peace and the persistence of war and impunity
5.3 Discriminatory treatment of victims by a law that is supposed to recognize them
5.4 ‘Fiscal sustainability’ is prioritized over compensation for the victims
5.5 Land restitution: consensus between supporters of opposing models of development
5.6 Recovering the land just to die for it
6. Favoring the land grabbers: two representative cases
6.1 Land grabbing in the Colombian Altillanura: the Orinoquia region
6.2 Land grabbing in the Montes de María mountain range in Bolívar and Sucre
7. Conclusion
8. Bibliography
Endnotes

Produced with financial support from the European Commission.
The views expressed herein are those of the author and not of the EC.