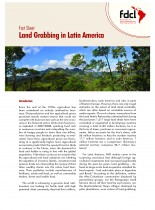 Since the end of the 1970s, agriculture has been considered an entirely unattractive business. Overproduction and low agricultural prices promised merely modest returns that could not compete with boom sectors such as the new economy or the financial sector. Only when food prices exploded in 2007/2008, sparking food riots in numerous countries and catapulting the number of hungry people to more than one billion, were farming and livestock producting re-evaluated. Since then, agricultural prices are fluctuating at a significantly higher level. Agricultural economists predict that the upward trend is likely to continue in the future, since the demand for food and fodder is rising in line with the global population. It therefore comes as no surprise that the agricultural and food industries are whetting the appetites of investors. Banks, investment and pension funds are channelling the money of their often wealthy clients into the entire food business. Their portfolios include manufacturers of fertilizers, seeds and food, as well as commodity traders, farms and arable land.

The world is witnessing a genuine land rush. Investors are looking for fertile land with high potential. Most commonly, they find this in Africa, Southeast Asia, Latin America and also in parts of Eastern Europe. However, there are only rough estimates on the extent of land deals available, which are often based on unreliable sources of media reports. On such a basis, researchers from the Land Matrix Partnership estimated that during the past years 1,217 large land deals have been concluded or negotiated in developing countries covering a total of 83 million hectares, be it in the form of lease, purchase or concession agreements. Africa accounts for the lion‘s share, with 56 million hectares; in Asia the number reaches 17.7 million hectares, and in Latin America, 7 million hectares (as a comparison: Germany’s national territory comprises 35.7 million hectares).

For Latin America, FAO studies came to the surprising conclusion that although foreign agricultural investments had increased significantly during the past ten years, land grabbing – defined as large-scale land acquisition intended for food exports – had only taken place in Argentina and Brazil.2 According to this definition, neither the Afro-Colombian communities displaced by paramilitary groups, nor the Paraguayan small farmers driven off their land by soy farmers, nor the Guatemaltecan Maya villages destroyed by palm plantations, were victims of land grabbing.