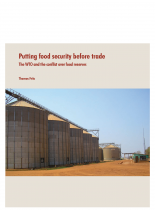 The last ministerial conference of the WTO, held in Bali/Indonesia in December 2013, had been overshadowed by a controversy over food security between a group of 33 developing countries (G33) and industrialized countries. The G33 sought changes to the WTO’s Agreement on Agriculture removing some of the constraints on the implementation of food reserves, a measure which gained more prominence following the food price crisis of the years 2007-2008. However, industrialized countries such as the EU and the US fiercely opposed this proposal claiming it would allow granting large sums of trade-distorting subsidies. In the end, WTO members found a compromise which enabled a successful conclusion of the conference. But from a food security perspective the interim solution agreed upon in Bali appears rather unsatisfactory.

This policy paper analyzes the background of the Bali controversy. It describes past experiences with food reserves managed by marketing boards in developing countries, their weakening following the debt crisis of the 1980ies, and the renewed interest in these instruments after the recent food price crisis. The paper provides an overview of WTO rules potentially constraining the implementation of grain reserves for food security purpose and analyzes the G33 proposal
negotiated at the WTO conference. The final recommendations emphasize the need for WTO rules to be reframed in order to adapt to the changing agricultural economy and to facilitate food security.

This publication has been produced with
financial support from the European Union.
The contents of this publication are the sole
responsibility of the publishing organisations
and can in no way be taken to reflect the views of
the European Union. This publication is published within
the framework of the EU funded project „Put MDG1 back
on track: supporting small scale farmers, safety nets and
stable markets to achieve food security“. Partners in the
project are: Glopolis (CZ), FDCL (DE), SOS Faim Belgium
und SOS Faim Luxembourg.