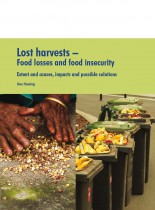 Debates on the issue of food production are enjoying a boom. The documentary film “We feed the world” or bestsellers such as “Die Ernährungsdiktatur” (The food dictatorship) have attracted a lot of attention. The film “Taste the Waste” and campaigns by the German Federal Ministry of Food, Agriculture and Consumer Protection (BMELV) (“Too good for the bin”1) or the WWF (“Tons for the bin”2) address food destruction and waste, bringing a particular aspect of this system to the fore. Talk shows discuss best-before dates, food thrown away by supermarkets, restaurants and households, abundance, healthier diets with less meat and “skipping”.

The discussions reflect a profound unease with a food system where all aspects of growing global inequality are concentrated: abundance and luxury at one extreme, and shortage and poverty at the other; waste here and malnutrition and hunger there; highly efficient supply systems that waste valuable resources. Rising global prices for staple foods and the associated protests in numerous countries of the Global South are the trigger for this new interest in our food and our consumer society as a whole. Stock exchanges and investment funds have discovered food as a new source of return and make prices the plaything of their speculations—at the cost of consumers. The number of those starving is once again on the increase. According to some experts, enormous productivity increases are needed to prevent bottlenecks in the food supply.3

Reducing waste, destruction and losses would seem to contribute significantly to solving this problem, since, according to some studies, 50% of food that is harvested by farmers worldwide is lost “from field to fork”. A large proportion ends up in the rubbish bins of the North, but a lot is also lost on its long journey from the South. According to a study carried out by the Food and Agriculture Organization of the United Nations (FAO), “addressing the topic of food losses is extremely important in fighting hunger, increasing income and improving food security in the poorest countries of the world”4; “it impacts on the food security of the poor, on food quality and security, as well as economic development and the environment”5.

The criticism is strongly focused on the role of individual purchasing decisions and an allegedly widespread “throw-away mentality”, factors that are also being indirectly held responsible for poverty and lack in the Global South. According to the first thorough analysis for Germany6, 61% of food waste, that is, 6.7 million tons, is produced in private households, and a further 17% is produced by large consumers such as restaurants, hotels, hospitals or schools. If we reduced waste in the North, the poor in the Global South would automatically have more to eat, so the argument goes. If customers bought only what they really needed and intended to use, demand would fall. This would also undermine rising prices and speculation. In addition, it could help to slow down the spiralling growth in use of resources such as land and water.

Private households, where food that has spoiled or is past its expiry date is thrown away, is at the end of a long chain of destruction and loss that occur once the food leaves the field, stable or water. Ethical and moral concerns and calls to consumers to change their behaviour are therefore understandable, but they address only part of the manifold causes of the problem.

Many development experts, politicians and international institutions focus their attention on the entire chain of losses, which begins already with the harvest.7 The World Bank hopes that reducing losses during the various stages in the journey made by food could render superfluous some expensive production increases and thus the additional use of scarce resources such as land and water. This would therefore be “more cost-effective and environmentally sustainable than a corresponding increase in production”.8

This brochure aims to present a differentiated view of different forms of waste, destruction and losses in the local and global food value chains “from field to fork” and to analyse their causes. The focus is especially on food losses in the South, since they impact directly on food security and the income of farmers. Building on this, it aims to identify which solutions and proposals are useful and necessary in achieving sufficient, secure and healthy food for everyone, and discusses how a reduction in food losses, destruction and waste could contribute to achieving this goal.

This text is the translation of the publication “Verlorene Ernte – Lebensmittelverluste und Ernährungsunsicherheit / Ausmaß und Ursachen, Auswirkungen und Lösungsansätze” written by the same author and published by FDCL in November 2012.

This publication has been produced with
financial support from the European
Union. The contents of this publication
are the sole responsibility of publishing
organisations and can in no way be taken to reflect the
views of the European Union. This publication is published
within the framework of the EU funded project
„Put MDG1 back on track: supporting small scale farmers,
safety nets and stable markets to achieve food security“.
Partners in the project are: Glopolis (CZ), FDCL
(DE), SOS Faim Belgium und SOS Faim Luxembourg.