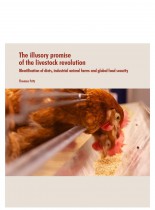 The recent worsening of the global food crisis, which had been sparked by sharply rising and extremely volatile food prices in 2007-2008, triggered a heated debate about its potential drivers. Among the factors singled out commodity speculation and the growing diversion of crops to biofuels ranked high on the list of suspected culprits. Yet, the long-time trend of increasingly ‘meaty’ diets driven by industrial livestock production received far less attention, although the channeling of enormous amounts of cereals and oilseeds into feed troughs represents an important share of global harvests and is known to be a highly inefficient way of using plant protein and the land needed to grow these crops. But even though the rapidly expanding system of industrial factory farms draws so heavily on harvests and increasingly scarce natural resources like land and water, it continues to be portrayed as a means for furthering global food security and for providing livelihoods for poor smallholders in the developing world.

Back in 1999, the United Nations Food and Agriculture Organisation FAO, together with the International Food Policy Research Institute IFPRI and the International Livestock Research Institute ILRI, argued in a joint report that global agriculture underwent a profound transformation, dubbed the ‘Livestock Revolution’. Unlike the earlier Green Revolution, which the report’s au-thors described as supply-driven, the Livestock Revolution was understood as demand-driven. Population growth, urbanisation and income growth in the developing world would be fueling the growing demand for animal-based products like meat, milk and eggs.1
The joint report suggested that the Livestock Revolution will be associated with major benefits for consumers and producers alike. While consumers could improve their nutrition by eating more animal protein, producers would be offered valuable new income opportunities. The report claimed that growing demand for animal products would hold promise “for relieving widespread micronutrient and protein malnutrition”2, and that the changing diets of billions of people “could provide income growth opportunities for many rural poor”3, provided that proper policies are put in place.

The question being explored over the following pages is if the perceived benefits of the Livestock Revolution for the world’s poor have actually materialised so far. What will be undertaken is a kind of reality check of some of the expectations and promises surrounding the global trend towards mass production of animal- based food and increasingly meaty diets. The lens through which this transition is being analysed is its impact on food security in the Global South.

This publication has been produced with financial support from the European Union.
The contents of this publication are the sole responsibility of publishing organisations and can in no way be taken to reflect the views of the European Union. This publication is published within the framework of the EU funded project „Put MDG1 back on track: supporting small scale farmers, safety nets and stable markets to achieve food security“. Partners in the project are:
Glopolis (CZ), FDCL (DE), SOS Faim Belgium und SOS Faim Luxembourg.