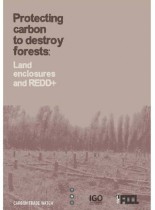 Introduction: Why is the REDD+ discussion important?

The need to halt the alarming rates of deforestation and forest degradation is without hesitation of high importance. Forests destruction displaces forest dependant peoples, often destroying their livelihoods and violating human rights. Moreover, even though the majority of greenhouse gas (GHG) emissions come from the burning of fossil fuels, deforestation also contributes to the accumulation of carbon dioxide in the atmosphere. Yet, the question of how remains problematic. The scheme Reducing Emissions from Deforestation and Forest Degradation in developing countries, and forest conservation, sustainable forest management and enhancement of forest carbon stocks (REDD+) aims to create a financial value for the carbon stored in forests, offering economic incentives for Southern countries to reduce emissions from forested lands. Guided by the United Nations (UN) and the World Bank, REDD+ proponents believe that although there are some problems with REDD+, these can be solved by securing large sums of money to improve its governance, safeguards and/or improve local communities’ ‘participation’.

However, the neoliberal governance reacting to the climate crisis is the product of a complex interplay between various actors and policy tools, such as within the UN climate negotiations, multilateral financial institutions, industry lobbies, big conservation organizations, sub-national programmes, voluntary carbon markets, etc., aiming to establish how the carbon ‘absorbed’ by nature can be accounted for and traded under REDD+. Thus, increasingly conflicting objectives are competing for taking a piece of forested lands. Inherently linked to such trading schemes, REDD+ is a key piece in the emerging ‘green economy’.

This paper helps to evidence that REDD+ will not stop forest destruction. Companies and Northern governments sponsor REDD+ projects and REDD-type funds with either public money or the carbon markets to show how they are ‘contributing’ to halt deforestation. However, the underlying causes of deforestation remain untouched and thus, the problem continues to worsen. Because REDD+ is embedded in the logic that environmental destruction can be ‘compensated’ for somewhere else it acts to reinforce the underlying drivers of deforestation and climate change. It also gives forest destroyers a way to legitimize their actions as environmentally ‘friendly’ or ‘carbon neutral’. Far from positioning itself as an ally to the many local groups that have preserved forested lands most strongly, REDD+ tends to silence debates about the unjust realities surrounding corporate pressures on land tenure regimes.

Moreover, the categories used to structure modern understandings of territories subordinate indigenous ‘world views’, which invoke a relational understanding of space that includes humans and non-human beings, to rationales of legally-defined rights, environmentalism, and cultural difference (Bryan, 2012). Indeed, in the rush for the ‘stored’ carbon, more lands and territories are being enclosed from people living in or dependent upon forests. Groups trying to influence REDD+ believe that it could be fixed if independent financial mechanisms outside of the carbon markets were used instead, such as taxes or other public funds. This paper aims to provide a historical background and experiences on the ground in order to further the argument that because land and nature enclosures are central to its operation, REDD+ cannot be fixed.

I. Introduction: Why is the REDD+ discussion important?
Carbon Markets: A short background

III. Spinning the same coin: From carbon markets to REDD+
CDM and REDD+: Two paths towards the same trap?
Forests for sale: The REDD+ story
Ready for REDD+: adjusting forested lands to the market logic
To market or … to market
Carbon markets in the soils: REDD and agriculture
Kenya Agricultural Carbon Project: carbon finance for whom?

IV. Reflections: From a history of enclosure to enclosure through REDD+

HANDS OFF THE LAND – TAKE ACTION AGAINST LAND GRABBING

a joint project of TNI, FIAN International, FIAN Netherlands, FIAN Germany, FIAN Austria, IGO in Poland and FDCL in Germany.
Published by TNI, FDCL and IGO for the Hands off the Land Alliance
Produced with financial support from the European Commission. The views expressed herein are those of TNI, FDCL and IGO and not of the EC.
Many thanks to Larry Lohmann and Winnie Overbeek for their valuable contributions to this publication

Published by TNI, FDCL and IGO for the Hands off the Land Alliance

Produced with financial support from the European Commission. The views expressed herein are those of TNI, FDCL and IGO and not of the EC.