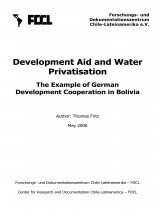 Multilateral and bilateral development co-operation plays an important role in the privatisation of water and sanitation services in the countries of the “Global South“. Besides the World Bank and regional development banks1, many bilateral donor agencies engage in the commercialisation of water: for example, the British DFID, Sweden’s SIDA, and Germany’s GTZ and KfW.

Without the support of aid agencies many water corporations, construction companies, equipment manufacturers and consulting firms would not become involved in the countries of the South. To a large extent, markets in Africa, South Asia and Latin America are perceived as “donor-driven markets”, i.e, they are dominated by donors and their policies. In contrast, water markets in the US or Europe are perceived as “customer-driven markets”. Therefore, European companies that engage in the water sectors of developing countries, often cooperate with international aid agencies.

These organisations play an important role not only in implementing and financing privatisation projects, but also in preparing the ground for private-sector participation. To a large extent, the work of GTZ and other development agencies focuses on “institution and capacity building”, that is, influencing the entire institutional and legal framework in order to facilitate market access of transnational corporations, protect their investments, and secure the transfer of profits to their countries of origin. By doing this, development agencies call into question their stated objective of promoting democracy. In some cases, they intervene massively in sovereign and democratic decision-making to impose private-sector participation. Recently, this was the case during the conflicts surrounding the failed water concession of the French world-market leader, Suez, in the Bolivian capital of La Paz.

On the following pages, we will describe the privatisation strategies applied by German development agencies. Germany is the second largest bilateral donor after Japan in the water sector. German development co-operation currently invests € 350 million per year in urban water projects in 28 countries. The government agency in charge of “financial assistance” is the Kreditanstalt für Wiederaufbau – KfW. The KfW Development Bank provides concessionary funds (grants, soft loans, mixed public-private financing), as well as loans on market-based terms for projects in developing countries. The GTZ (Gesellschaft für Technische Zusammenarbeit) is in charge of “technical assistance“. It provides consultancy Development Aid and Water Privatisation FDCL services and engages in sector reforms. GTZ advises governments, ministries and water authorities, develops plans for the efficient use of water resources and drafts laws and regulations for reforming national water policies.

The example of German co-operation in Bolivia highlights problems that official reports discuss either insufficiently or not at all, such as the vested interests of aid agencies, which contradict their self-image of “honest brokers“, “moderators“ or “mediators”, the sometimes huge pressure these agencies exert on their partner-countries, as well as their undemocratic influence on legislative procedures. This case study wouldn’t have been possible without the resistance of Bolivian social movements who systematically documented their clashes with German development co-operation.

Introduction
Bolivia: „Honest Brokers“ at Work
Law 2029 and the Expropriation of the Water Committees
Conflicting Roles: The GTZ as both Moderator and Party
The German Plan Bolivia
Resistance to the Shareholder Model
Aguas del Illimani: Germany Intervenes
Development Co-operation versus Democracy
Literature

This publication was elaborated within the framework of the cooperation-project „Handel-Entwicklung-Menschenrechte“ of the Heinrich Böll Foundation (hbs), the Forschungs- und Dokumentationszentrum Chile-Lateinamerika (FDCL), and the Transnational Institute (TNI). More information at: