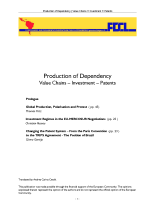 A number of recent developments have brought attention back on subjects regarding global production and dependent development. The impact of liberalisation on the industrial development of peripheral economies has increasingly been a controversial issue in bilateral and multilateral free trade negotiations. And more frequently than in former years, governments from Latin America, Africa and Asia have been coordinating attempts to expand their scope of industrial policies, which global value chains and the international trade regime increasingly narrow. In some cases, these efforts have proved successful: at the World Trade Organisation conference in Cancún in 2003, a broad coalition foiled an attempt by the European Union to negotiate a global investment agreement which would follow the WTO logic of easier market access – hence an agreement formed precisely not to protect the ‚infant industries‘ on the periphery. Likewise, the development countries are taking up positions in the matter of intellectual property rights which are increasingly relevant to modern network production. A group of 14 countries headed by Brazil and Argentina have presented an initiative for a new development agenda at the World Intellectual Property Organisation, WIPO. They are aiming at a development-oriented reform of international standards in intellectual property which would allow for technology and knowledge transfer by restricting the scope of copyrights and patents. After the multilateral level, the struggle for leeway in industrial policies continues in the context of bilateral and interregional liberalisation negotiations. Bilateral trade agreements allow for considerably deeper cuts in national industrial politics than any multilateral framework would ever permit. Thus the current negotiations between the EU and MERCOSUR on an interregional free trade zone include, among other issue, the investment regulations that have, until now, failed in the WTO framework.

Not least, the discussions on industrial development took place against the background of hierarchically structured global value chains – governed by transnational corporations – that shape today’s world labour division. Individual countries, above all in Latin America and Asia, managed to become integrated into these networks as subordinate manufacturing localisations, for instance, in the carmaking, electronics or food industries. It is one of the contradictions of globalised production that on the one hand, it constantly triggers important class formation processes and the emergence of independent trade unions, while on the other hand, it sets off mechanisms of dependent development, which generate considerable social disparities at national and international levels. It is becoming increasingly evident that the internal trade regime contributes to maintaining the value hierarchy typical for interconnected production.

The present publication is embedded in the ‚Free Trade and Industrial Development‘ project.

Union (EU) and the Common Market of the South (MERCOSUR)? 2

in the four MERCOSUR Member States 3

3. Regimes in the EU-MERCOSUR Negotiation Poker:

6. Bibliography 23
Changing the Patent System – From the Paris Convention (pp. 23 ) to the TRIPS Agreement – The Position of Brazil
Cícero Gontijo

1.1. The Paris Convention and the Legislative Freedom of its Member States 3

1.2. Compulsory Disclosure and Exploitation of the Patent in the Country of Origin 4

1.4. The TRIPS Agreement: Flexible Monopolies in the Times of Free Trade 6

1.5. The End of Exhaustion and the Introduction of the Compulsory Licence 7

2. THE CONSEQUENCES OF TRIPS FOR DEVELOPING COUNTRIES 9

2.2 Prices for Products which cannot be Substituted 11

2.3 The Aids Issues. Rejection of the Patent System 11

3.2 Avoid TRIPS plus and act in the WTO for a modification of TRIPS 16