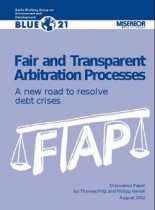 A contribution to the reform of the international financial system

The Asian economic crisis of 1997/98 sparked discussion about necessary reform of the international financial system even in official institutions of the financial world. The question of debtor/ creditor relations was addressed, as well as durable solutions for the debt crises of developing countries. But discussions within official institutions led to only a few proposals with no further suggestions for fundamental improvements.

Alongside this official discourse was non-governmental work in both North and South. Non-governmental organisations, churches and social movements, some directly affected, focused on debt problems and submitted numerous proposals. Besides the realisation that debt crises can only be defused by substantial debt relief, the question was how debt relief and future debt relations could be rearranged in the interests of those who, thus far, have carried the main burden of indebtedness: the poor and impoverished people of the debtor countries.

Defeating the „creditors cartel“ has emerged as key to the question of „How“ in the context of debt relief and borrowing. This is because creditors alone determine the rules for debt relief, debt restructuring and new borrowing. Debtors currently have no say in the decision-making process concerning their debts.

Because of that BLUE 21 and MISEREOR, together with NGOs, social movements, intellectuals (and by now even some official authorities) in North and South, encourage the establishment of Fair and Transparent Arbitration Processes. With participation of the affected governments and especially civil society, this approach should resolve the current debt overload of developing countries, and prevent it in the future. This paper will hopefully stimulate discussion about these arbitration processes, to develop the concept further and encourage its application.

The discussion must involve those concerned in the debtor countries. That is why this paper is being published simultaneously in English, German and Spanish.

Discussion about alternatives to the status quo is also necessary in our own society. Thus the paper presents the idea of Fair and Transparent Arbitration Processes, gives information about the institutions which determine today’s debt management, and promotes discussion of some key aspects of the process. We hope that this paper will be a small step ahead on the path to greater justice globally and international solidarity, and look forward to continued critical and constructive discussion toward those ends.