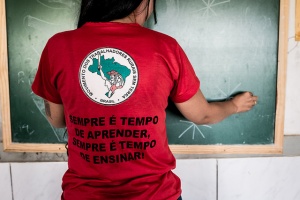 We will debate the experience of the Movimento dos Trabalhadores Rurais Sem Terra (MST) [Landless Rural Workers´ Movement] in the field of agro-ecology and of education.

The MST is fruit of the restructuring of the land during the civilian-military dictatorship and of the actions carried out by workers who occupied lands. In this struggle, numerous other struggles appeared: struggles for schools, organisation of the production in an associated or individual/family form, gender questions, political training and, more recently, struggles in the field of food production without agro-toxic and transgenic products and for food sovereignty.

With a view to the organisation of labour in the countryside, the predominant tendency is that of family production and associated commercialisation. In the countertendency, some few experiences of collective work. As far as agro-ecology is concerned, since the beginning of the 1990s MST has produced numerous actions of denouncing the Green Revolution and of stimulating the transition of production having agro-ecology as paradigm.