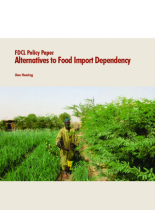 The number of proposals, strategies and initiatives how to improve food security and agricultural production have become vast and hard to follow up. Suspiciously, one aspect is missing in these debates, or if it comes up, it is rejected outright by most proponents: Could import restrictions help to stimulate agricultural production and benefit small-scale farming families? What are the preconditions for a rational and „smart“ implementation of import regulation to achieve these objectives?

While it is obvious that the availability of cheap food for several decades and the liberalised trade regime did a lot of harm to agriculture and trade in the importing countries, especially in the poorest countries, thinking about at least a partial and targeted reversal of this approach and the trade liberalisation dogma is a taboo in official trade and development circles.

But a number of countries have already begun to put some kind of import regulation back into practice after several experiences where this had positive impacts on local production and supply, incomes and poverty reduction. Therefore there are many good reasons to have a closer look at this trade instrument, its advantages and risks, especially when looking for alternative solutions to support local peasant agriculture and food security.

The end of ‘cheap food’

Contributions by family farms to reduction of import dependency

The responsibility of the European Union

This publication has been produced with financial support from the European Union. The contents of this publication are the sole responsibility of publishing organisations and can in no way be taken to reflect
the views of the European Union. This publication is published within the framework of the EU funded project „Put MDG1 back on track: supporting small scale farmers, safety nets and stable markets
to achieve food security“. Partners in the project are: Glopolis (CZ), FDCL (DE), SOS Faim Belgium und SOS Faim Luxembourg.